My Writing Week (and Contest info)

This has been an interesting week for me in terms of books and writing. First up, when it came to my WIP, I hit a wall and it almost had me tearing my hair out. My word count so far is just about 70k, which means I'm in the home stretch, but it wasn't until around 65k that I had a panic attack over the story. It was one of those moments when after plowing through the book and thinking everything was going well it suddenly hits me that there were gaping holes that need to be filled. I realized that there were several HUGE issues with my main story line and for the life of me I could not figure out how to fix them...thus the almost hair pulling. It took a few days before I was able to figure things out, which included a lot of back tracking and adding things, changing things, and deleting things, but now I am tentatively moving forward and on my way to finishing the book. Of course it's a total mess full of inconsistencies and places where further things need to be changed, but that's all part of the fun I get to take care of once the book is done and editing begins.

I also had my logline critiqued over at Miss Snark's First Victim and the critiques were very helpful. I find loglines are not fun to write at all because it's not always easy to figure out what to include and what to leave out but I think mine is one its way to a better place. I'm planning to enter her Baker's Dozen Agent auction this year, so my logline has to be the best it can be. If you don't know about the agent auction you can get info on it on her blog.

I also attended a book signing event for Maureen Johnson's new release "The Name of the Star" this week. She's very nice and very witty and it was a pretty cool event, got my book signed and there were cupcakes which is always a plus. Here are a couple pics: 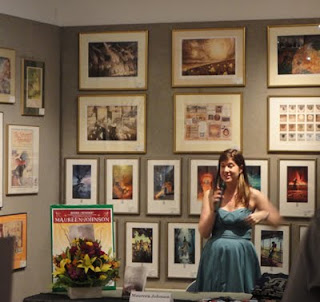 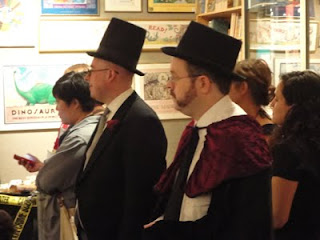 And finally, there are a few cool contests going around that I thought I'd spread the word about. First of all, author Lisa L. Regan will be hosting a "Hook for Your Book" contest to be judged by her agent Jeanie Pantelakis. There will be three different events, for Fantasy, Romance, and Historical fiction, starting with Fantasy on October 10th, so check it out if you're interested: Hook for your Book contest info.

Jess from Falling Leaflets also posted about a few contests so be sure to check her blog out as well for more info.

And lastly, I am showcasing the custom banner that was made for me by Kristal over at Operation Awesome as part of a prize pack I won a couple weeks ago: