Comic Con was fun and exhausting, so exhausting that I only went Friday and Saturday and let myself recover on Sunday. I had no idea that going to a convention could be so tiring! My body was literally aching...which was due to the fact that both days I lugged around a heavy swag bag. Saturday I went to dinner with friends after and had no choice but to bring the bag and it of course decided to rip...by the handles no less, so I had to hug it like a baby to take it home. And it was rainy. Which was fun. But I digress. Overall it was a fun experience. Massive crowds of self proclaimed geeks, lots of booths on the showroom floor, lots of interesting panels. I attended a panel on the new NBC show Once Upon a Time where they screened the first episode and I thought it was really good, definitely looking forward to adding that show to my roster.

There were also a lot of book stalls, publishers like Penguin and Carina press were there, and it was actually the books that weighed my swag bag down and subsequently broke my shoulder. I got a signed ARC of Lia Habel's debut novel Dearly, Departed, and I also got C.E. Murphey's autograph. I wanted badly to get Tamora Pierce's but her signing clashed with a panel for one of my favorite shows, Nikita, so I had to make a tough choice there. The Nikita panel was also a highlight, the stars Shane West and Maggie Q were there. Another highlight was getting to chat briefly with James Marsters (Spike from Buffy the Vampire Slayer). And of course there were tons of great, not so great, and kooky costumes around. Here's an example of not so great: 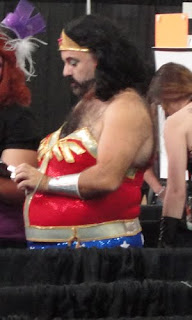 Anyhow, I'd like to share a bit of the wealth I scored, so I am doing a Book Giveaway! I have a signed copy of Dearly, Departed by Lia Habel, as well as a copy of Across the Universe by Beth Revis (this is not signed), that I will give to a random commenter. Comment by the end of the week if you'd like these books! (if you want to share the giveaway info please do, but only followers will be eligible). I will ship anywhere in the U.S. 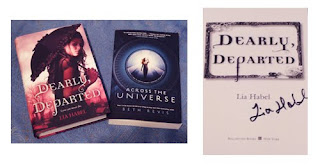