I'm part of a small book club where we will be reviewing ARCs we got at BEA. Today I will be posting a review for Throne of Glass by Sarah J. Maas, which is released on August 7th. This ties in nicely with the Buccaneer Blogfest since the last post for this week is to do a book review. I'll just be doing mine a day early since we arranged to post our reviews today. You can find links to everyone else's reviews at the bottom of this post. Warning -- the reviews can be spoilery. 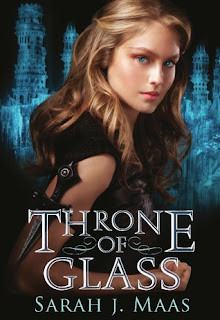 Throne of Glass is a YA fantasy novel that follows seventeen year old assassin Celaena Sardothien as she’s plucked from a death camp by the crown prince and chosen to be his champion, to compete against over twenty other murderers and thieves in a quest to become the king’s champion. If she wins the competition she gains her freedom after four years of service to the king, if she loses she’s sent back to the harrowing salt mines she was taken from.

Throne of Glass was listed as perfect for fans of Game of Thrones and the Hunger Games novels, so I had the expectation that there would be a lot of action, mainly involving Celaena fighting her way through her competitors to win. However, I was disappointed by the lack of action, and what we got instead, the competitors going through challenges and being eliminated, was not that engaging or interesting. However, the main character Celaena, definitely has a strong voice and comes across as extremely tough and witty, but not without her softer side, and while I liked her sense of humor and the way she interacted with some of the other characters, I had a hard time buying the fact that she is a ruthless, infamous assassin who doesn’t think twice about killing. Even if she was a trained assassin, I feel like something should have been said that at so young an age she was already such an accomplished murderer. We get hints at her past, involving the death of her parents and the person who trained her to become an assassin, as well as a past love and a betrayal that landed her in the salt mines, but the book ends leaving us only with hints. While I would have liked more of her back story I understand that in a “Book One” you can’t give it all away, so I am sure those hints will be explored in further novels.

Maas definitely has some good prose going, but there were numerous places that I found to be unbelievable or awkward and those things threw me out of the narrative. The novel switches perspectives between at least four characters, and at times I was not sure whose perspective I was following if two of those characters were in the same scene. Also, I was less invested in reading from certain character’s perspective than others, so there were parts of the novel that dragged for me.

As for the romance, as with most YA books there is a love triangle, but I honestly was not extremely invested in either of them. The love triangle involves Celaena, the prince, and the captain of the guard, who is also her trainer. While I like a well paced buildup to romance as opposed to two characters just falling on each other fast, to me the buildup was too long and not believable enough, so when the prince and Celaena finally kiss, I wasn’t moved one way or another. I felt like a more interesting relationship was between her and the captain of the guard, but there wasn’t much development there, and I felt as though there was too much back and forth in how they felt about each other for me to really understand what kind of relationship they had or were trying to have.

There is a murder mystery aspect to the novel as well, and it involves the magical element of the book; the champions start dying in gruesome ways, and no one knows who or what did it. When the magical aspect starts to develop more, it’s interesting, but also a little predictable. I knew who did it long before the characters did, and I felt like with the truly horrific way specific people were dying, there should have been more fear and hysteria going around, and even after three champions died they still couldn’t figure out that it was a pattern. This was one of my biggest issues with the novel; having smart characters not figure out obvious things for the sake of tension or keeping readers in the dark. A lot of times the things characters would say or the way they would act induced an eye roll in me. For example, I didn’t understand why such a ruthless, fearless assassin never tried to escape and only thought about it, even when she found a secret passage in her room (!) that led outside to an area of the castle that wasn’t guarded at all (even though there were over twenty ruthless murderers and thieves staying there). It would have made for great action if she had attempted to escape, even if she failed.

Overall, when the explanation of the magic is revealed, I think it ends up being one of the stronger aspects of the novel. Throne of Glass was not a bad read, but it also did not blow me away. However, I will probably continue reading the series to see where Celaena’s story takes her. The novel gets 3 out of 5 from me.