Is It Getting Hot In Here? 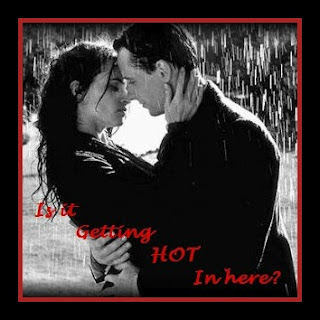 What a perfect day to read some hot and steamy scenes with the 'Is it getting hot in here' blogfest hosted by Cassie Mae (Cassie's blog has links to everyone else's scenes). I jostled between which scene to choose finally settling on something I figure has enough heat to suffice. This scene is about the same characters from this scene I wrote for the Warm Fuzzies blogfest but happens later in the story from that other scene. It also includes two of the characters I drew for the same Warm Fuzzies blogfest so I thought it'd be fun to continue these guys little love fest. So here it is:


He kissed me, and it did the efficient job of making me forget everything else. The kiss was gentle at first, soft and probing, and the way I could feel him teasing me with the promise of something deeper pushed me to the edge of delicious frustration. His tongue played against mine, almost giving in, but pulling back, and I made small sounds in my throat that in turn made him chuckle, and pull me against him until I was straddling his waist. I bit his lower lip and was rewarded with a moan that sent shivers through me. I pulled away a little so I could take a breath, and Lucen sighed against my skin. His hands were moving up my back on my bare skin, and his touch was feverishly hot. I felt like we were suddenly sitting in the middle of a blazing inferno that burned endlessly but didn’t touch us. He caught my lips again, and this time the kiss was far from gentle, it was wild, explosive, and demanding, and the sheer force of it drove us down onto the bed. Lucen flipped me over until I was underneath him and he was staring at me with so much want and need on his face that it made my bite my lip in anticipation. He started planting soft kisses along my jaw line down to my neck, while the hand he wasn’t using to prop himself up made quick work of getting rid of my tank top. I was suddenly nude from the waist up while his hands sensually splayed all over my body. He caressed my breasts, and the jolt that went through me bowed my back off the bed and made my entire body tighten. Lucen grabbed me until I was pressed tightly against him, then he kissed me again and I was only dimly aware that I was tearing his clothes off.