Cover Reveal - Affairs of the Dead

There are only two more days until Affairs of the Dead is released, so I'm happy to whet your appetites with the cover, and I'll throw in the first page just for fun. I'm very happy with the cover, so here it is: 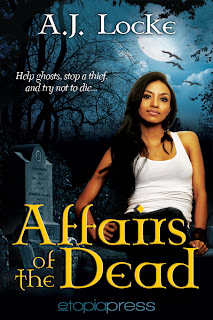 I was in a strip club trying to help a ghost get laid, which was challenging but not impossible. It was just extremely taxing on the necromancer extraordinaire (me) who had to channel energy into the ghost to make her corporeal enough to entice one of the stripper boys. Technically what I was doing was illegal, but it was my job to help ghosts settle their affairs so they could move on to eternally ever after, and Julia’s unfinished business was that she’d died a virgin. I’d made it as easy as I could for her by starting at a strip club; if she couldn’t get some here, I wasn’t sure how much lower I could scrape the barrel.

Julia’s prolonged virginity was an enigma to me, even though she told me that she’d been waiting for her soul mate. I just didn’t understand why that meant she couldn’t hit up a bar; get drunk; and have a fun, regret-filled weekend that included the walk of shame. At least she’d have been in better shape once Soul Mate came around.