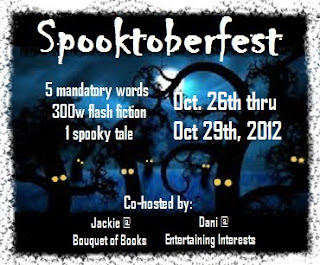 Here's my piece for Dani and Jackie's Spooktoberfest, in which we had to incorporate the words cobwebs, jack-o-lantern, ghost, cauldron, and razor into a 300 word piece:

The only light I had to see by came from the flickering candle inside the jack-o-lantern that sat in the corner of the room. During the day it had looked like a non-threatening, smiling pumpkin, but now the shadows that crowded around it and the flame that danced inside it made it look like it had crawled out of a nightmare. I swept my eyes around the room for the hundredth time; trying to convince myself I was safe. I would have given myself more light, but I didn’t want to give them any more reason to find me. Though really, could you hide from ghosts? I laughed softly at the thought, but it wasn’t a happy laugh, it was the laugh of someone whose mind had melted into a miasma of insanity; like a cauldron full of toils and troubles, something spun from razor sharp nightmares that cut through the defenses I had tried to build up like they were nothing but cobwebs. I had definitely lost my mind, because it was Halloween night, and here I was sitting in a dark room with a pumpkin for company, waiting for ghosts to come and claim me. They had warned me, but I hadn’t listened.

A laugh resounded somewhere outside, and it sounded like the laughter of some innocent soul who didn’t know what this night was really about. Then the windows suddenly rattled as a gust of wind slammed into them; the door shook and the candle flamed snuffed out, and that laughter abruptly became a scream. And I was next.
Posted by A.J. Locke at 2:48 PM