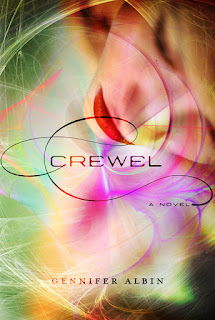 For generations, Spinsters have been called by Arras’s Manipulation Services to work the looms and determine what people eat, where they live, how many children they have, and even when they die. Gifted with the rare ability to weave time with matter, Adelice is exactly what the Guild is looking for, and in Arras, being chosen as a Spinster is everything a girl could want. It means privilege, eternal beauty, and being something other than a secretary. It also means the power to embroider the very fabric of life. But once you become a Spinster, there is no turning back. Now caught in a web of lies and intrigue, Adelice must decide who to trust: her kind mentor, Enora; the handsome and mysterious valet Jost; or the charismatic Guild ambassador Cormac Patton. They each have secrets, but Adelice is about to unravel the deadliest one of all, a sinister truth that could destroy reality as she knows it.

Crewel gets points for its high concept; I had never read a book like this before, that took the concept of spinning and weaving and turned it into something the entire world of the book was based on. It actually reminded me a little of the movie Wanted, where it’s revealed that the Fraternity did things based on a Loom of Fate that involved weaving. I remember being somewhat confused by the weaving concept in the movie, and it was the same for Crewel.

It took me a little time to sink into the world because I did not immediately grasp the concept of weaving and how it worked. In some ways I feel as though the novel did not quite achieve what it set out to in regards to building a story around the concept of weaving things in and out of existence. However, as the story progressed I started to understand it a little more, so it was not too much of a struggle to read the book through.

What was less appealing to me about the book was the fact that I don’t feel as though a lot happened throughout most of it. There weren’t a lot of twists or revelations, it was more like a gradual unveiling of information, but I was not sure where it was all leading. That said, I realize that the story is more character driven than plot driven, but given the scope and uniqueness of the world, I wish there had been more stakes involved for Adelice. Speaking of Adelice, I have to say that I did not connect with her very strongly; I understood why she had the sort of personality that she had, but I found myself disliking her more than liking her.

There is a love triangle, of course, with boys who could be seen as polar opposites, and I was drawn to one pairing more than the other. Also, while I found Adelice and Jost’s interactions to be cute, I wondered about what reason they really had to like each other. However, Jost is more than just a love interest, he has his own story and agenda, and I think it will be interesting to see where future novels take the story, especially given how it ends.

Overall, I think Crewel was less than I was expecting, I was not blown away by it, but I did not dislike it. It is very unique, and I would be interested to see how it develops.

Alexa's Review
Shanella's Review
Rachel's Review
Crewel gets three out of five.
Posted by A.J. Locke at 7:01 AM