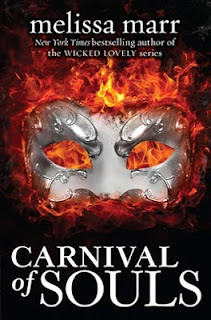 Carnival of Souls straddles two worlds, and follows several characters throughout the story. Mallory lives in the human world, was raised by her mother (who eventually left), and witch stepfather, who is overly protective and teaches her how to fight to protect herself from daimons, who Mallory was raised to believe are evil. In the other world, The City, Kaleb and Aya are daimons who are taking part in a fighting competition where the winner will have a chance to move up to a higher class and a better life. Kaleb and Aya are each fighting for their own reasons.

I enjoyed Carnival of Souls; I’ve never been the biggest fan of books that switch narratives, but Melissa Marr had already made me a fan with her Wicked Lovely series. The thing I need the most is to care enough about each character to want to read from their perspective, and Carnival of Souls definitely drew me in. I was especially drawn in by life in The City, the class systems, the different kinds of daimons, as well as the fighting match. You might say it has a little Hunger Games in terms of the competition where it’s basically kill your opponent or have them surrender so you can move on, but it’s distinct enough to stand on its own without comparison to Hunger Games or even Throne of Glass, which was a recent read that involved a fighting competition.

What was most interesting was learning what Kaleb and Aya were after, what they were willing to do to gain it, and how their stories eventually came to intertwine. While I did find The City a very interesting place to be, I was a little confused sometimes by the distinction between the class systems and trying to figure out if overall it was a relatively happy place to live or if it was oppressive. Also, I couldn’t quite figure out if The City’s ruler, Marchiosas, was good, bad, or something in between, but I’m leaning towards the latter. I also wish Marr had given a little more description in terms of what her creatures look like, because when I read a name for a type of creature I had to figure out of it looked human like or creature like. However, this wasn’t an issue that necessarily threw me out of the novel.

Initially I thought the story would mostly follow Mallory, but I think the focus was more on the characters from The City. Mallory has a lot to come to terms with regarding her father and certain things she finds out about how he’s chosen to protect her, but she does meet and interact with Kaleb, who can travel between the worlds. However, Mallory is unaware that his is a daimon. There is no love triangle (refreshing), and Kaleb and Mallory have an instant attraction, which is especially strong on Kaleb’s part because he recognizes that Mallory is not exactly human and has a stronger connection to him than she knows. I will say that when Kaleb’s intense feelings come out I found it a little unbelievable because Mallory and Kaleb still only barely knew each other, but I think Mallory’s reaction to his intenseness was believable, so there is a balance there. There is also a romantic angle between Aya and her ex-fiancé Belias, who have a very complicated relationship.

There were times where I wished Mallory would hurry up and learn the truths she was supposed to learn; I kept feeling like that’s what the story was driving towards only to come up short, but since this is a book one, I know things will progress in the sequel. The interweaving storylines and relationships between the characters was very interesting, and I look forward to continuing the series.

Carnival of Souls get 3.5 out of five.