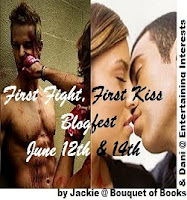 Today is day one of the First Fight/First Kiss blogfest hosted by Danielle and Jackie. Up first we're supposed to share the first fight, be it physical or verbal, between our MCs. I decided to share a fight scene from my most recent novel (adult UF) between the main character Selene and love interest Micah. Of course it takes a little time for the love to blossom ;). They actually spend a good part of the novel being at odds. Enjoy!

“What’s up your butt?” I asked, leaning my hip against the edge of his desk. Okay, maybe that wasn’t the best opening line I could have come up with.

“You get on my last fucking nerve, do you know that?” Micah said. He was staring very decidedly at his computer screen although it was booting up so there wasn’t anything of interest to see there.

“I get that from a lot of people,” I said. “And even some ghosts. What I don’t get about you though is why I work your poor nerves so badly.”

“You’re reckless and you get everything handed to you, how’s that to start?” Micah said, angry eyes finally snapping to my face. “Andrew had me tailing you for weeks; he took me off working with clients so I could build a report on you. After the first two weeks I had enough dirt to warrant your reassignment or suspension, but Andrew told me to keep following you, claiming he needed more evidence. Sounded more to me like he was turning a blind eye towards the things you were doing.” He shook his head. “If you were fucking Andrew he’d probably let you get away with outright murder.” I almost had a reaction to those words then remembered that he hadn’t accused me of anything; he’d said ‘if.” Instead of looking guilty, I gave him a thin smile.

“I guess this is the part where I defend myself, but I can’t do that,” I said. “I’m fully aware of the choices I’ve made, Micah, and I don’t regret anything I’ve done. If you ask me, my rule bending saved you and a lot of people in here from being forced to do more than one necromancer circle, so I’d say I was doing everyone a service.”

“I really don’t,” I said, shrugging. “But maybe it would be better if you didn’t let me bother you so much. I got in trouble and am being punished, and that’s my business, why let it be such an issue for you?”

“Because,” he said sharply, and I was a little taken aback by the intensity in his voice. He looked away. “Never mind. You’re not worth it.”

“Precisely,” I said brightly, though there was a little part of me that withered when he’d said I wasn’t worth it.

Looking forward to sharing their first kiss on Thursday!