Super excited to share that the sequel to Affairs of the Dead is out today! Requiem for the Living continues Selene's story and packs a punch if I do say so myself. I don't think I've put any character through the ringer as much as Selene! Grab a copy and find out how she handles it. And if you haven't read Affairs of the Dead, grab both!

I'm also running a giveaway to celebrate the release. Amazon giftcard and copies of Affairs and Requiem are up for grabs!

There will be a blog tour with a bigger giveaway June 8 - 19 with lots of cool prizes, so stay tuned! 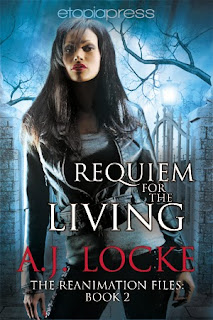 Selene is slowly dying...too bad that’s the least of her problems.
You could say that Selene Vanream has a lot of problems. First there’s the Rot that’s slowly killing her, despite everything Ilyse and Micah are doing to find a way to save her.
Then there’s Andrew, the ghost of her boss who is anchored to the living world. Selene would like to ignore him, but anchored ghosts with unsettled business turn into anchored beasties, so she can’t write him off. The government has sent a team to post up at Affairs of the Dead and keep an eye on her, which includes making sure she plays up to Andrew to keep him from turning.
On top of that, someone is using Selene’s new power to create anchored ghosts for their loved ones to keep around. Not good since the culprit doesn’t have a clue about that whole anchored beastie angle. Now Selene has a criminal to catch while trying to stay out of the hands of government goons who have stripping her reanimation power on their agenda.
When Micah and Ilyse finally find a way to save her, Selene thinks she can cross one bad thing off her list--until she learns the terrible price that must be paid to keep her alive. Full plate doesn’t cover it. Overflowing plate doesn’t cover it. Selene’s plate has damn near exploded.

There were a few things that made me feel like my day was not off to the best start. For starters, I had overslept by an hour and a half so I was monstrously late for work. Then there was the scent of smoke creeping into my bedroom accompanied by loud swearing, which meant my ghost roommate had made a disaster of whatever he was trying to procure for breakfast. The sky was overcast so it’d probably be a rainy day. I had a slight headache…and oh yeah, I was looking into my backyard at my Yorkie, Luna, digging furiously in the dirt. I was almost certain what she was trying to unearth wasn’t one of her toys.

I stood there for a few moments more, trying to decipher what it was that Luna was pawing at, then shook my head and ran out of my bedroom. I almost collided with Ethan, who was on his way to my room with a frying pan in his gloved hand and the charred remnants of what he’d come to dub the wake-up bacon.

“It’s burnt, but I figured waving it under your nose would still get you out of bed any—Hey, what’s wrong?”

I brushed past Ethan and ran into the yard where I snatched up Luna, then had a good, hard look at what she’d been wrestling with. I’d been hoping that it was some oddly shaped root or five fingered toy I didn’t remember buying for her, but no, it just had to be the worst possible thing.

a Rafflecopter giveaway
Posted by A.J. Locke at 9:26 PM