I'm happy to have Ally Shields on my blog today as she discusses her latest release, Cross Keys! Take it away Ally:


Thank you so much for hosting me and my new urban fantasy release today! I'm thrilled for the opportunity to tell you a little about my book and to share a Cajun recipe, one of several I brought back from New Orleans while researching the book. (If you look around the blogs listed at the end, you'll find eight more recipes!) 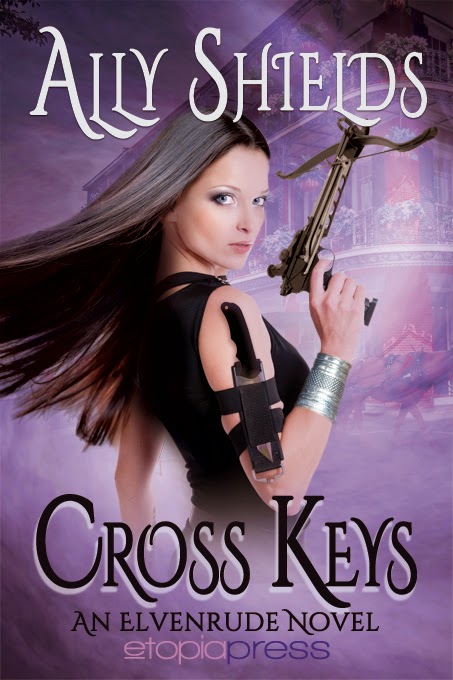 Conspiracy, murder, and magic…and the death of all they hold dear.

When the first wanderer—a common elf who isn’t authorized to use the portal—is spotted on the streets of New Orleans, the king assigns Kameo Ryndel to assist in the elf’s capture. But before she can intervene, humans with guns shoot the wanderer and steal his body. When Seth Lormarc, an Elite elf from a rival guild, appears at the scene, Kam suspects he is involved.

Seth Lormarc is in New Orleans to find out who was behind the portal breach, and his best lead is the intriguing Kam Ryndel. When he stakes out her apartment and finds her sneaking out in the middle of the night, dressed in black and leaping to the top of the nearest building, he knows there’s something unique about the beautiful elf. That kind of feat requires magic. Ancient magic.

As their paths cross during their investigations, they develop an irresistible attraction, although there’s little time for romance. The portal breach is tied to an illegal smuggling operation that has come to the attention of the human CIA. But the stakes are raised when Kam and Seth discover a band of conspirators and a rebellion deep in Elvenrude that promises nothing except destruction of their world.

Ally Shields was born and raised in the Midwest, along the Mississippi River, and considers herself a "river rat." The setting and folklore of the river regions are often incorporated into her urban fantasy books. After  a career in law and juvenile justice, she turned to full-time writing in 2009, and Awakening the Fire, the debut novel in her Guardian Witch series, was released by Etopia Press in September 2012. There are now six published books in that series. Cross Keys is the first novel with all new characters.
When not writing, reading or spending time with family, she loves to travel in the US and abroad. Way too often she can be found on Twitter.