The Raven Boys is out, and Shanella, Alexa, and I had a little BEA Book Club discussion about it: (Warning, our Q&A is a little spoilery)

Did you wish the story focused more on Blue and her "curse"?

Shanella: I didn't really miss Blue when she wasn't in the story. I know that the synopsis set it up with her as the main attraction, even the beginning seemed to center around her, but I found Gansey's feverish quest a bit more interesting than Blue's cursed romantic life.

AJ: I think if the book had focused more on Blue it would have satisfied my expectations, but it would not have been the unique book that it was, because I think there are a lot of books out there that focus on the romantic dilemma between the main characters. Once Gansey's quest started to unfold I was completely caught up in it and I think it was a good thing that the book didn't just focus on Blue and Gansey.

Alexa: To me, the curse was a convenient way to throw Blue into the path of the raven boys. I'm being pretty blunt about it, but I think it's the truth. The story would have come off completely different if Blue was the main focus, and not just another element of the story. It's fascinating that she has to deal with that curse, of course, and I'm curious as to what the curse will mean, but I'm actually okay with it not being the major focus of the story.

What did you think about the romantic set up? Do you feel there was enough set up for Gansey and Blue?

Shanella: I was wondering why Adam was even added to this mix! I mean, it's a bit obvious - from the book itself - that Gansey is Blue's true love and though the little romance between Blue and Adam was cute, I kept wondering what it's grander purpose would be. I hope it's not to have a love triangle where Blue and Gansey would be angst ridden because they are falling in love and they don't want to hurt Adam; that would be too cheap!

AJ: I was also wondering why the book focused more on Adam and Blue and it made me wonder if I was wrong in assuming Gansey was the romantic lead. But of course we all know it's ultimately going to be Gansey and Blue, and I wish there was a little more set up for them for the next book, and I'm interested to see how far Adam and Blue go.

Alexa: I feel like Maggie was hinting towards a love triangle, what with her mention of Adam and Blue as...well, something. It was weird to me, actually, to read it (Adam and Blue), knowing in my brain that there was supposed to be Blue and Gansey! I was actually hoping there'd be more set up for them, since at the moment they appear to just tolerate each other...

For more questions and answers head over to Shanella and Alexa's sites!

Shanella asks: Is there some part of the story that you wished there was more of?

Alexa asks: Which Raven boy did you feel like you could relate to the most and why? 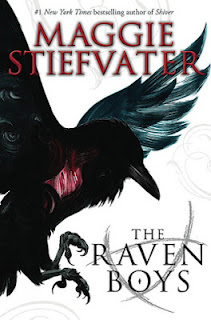