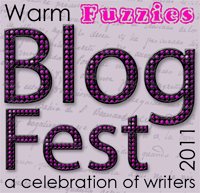 This week for the Warm Fuzzies blogfest hosted by Juliana Brandt, our challenge is to:

Take a moment to look at the trouble you get your MC into. How do you kick them while they’re down? Without revealing too many secrets about your WIP- take us through your MC’s arch.

The challenge for this week is to visit as many blogs as you can and based on their exert/summary, come up with a title for their WIP. Your title can be funny or serious, whatever you’d like. (The winner will receive one of Juliana's hand-made journals).

In my WIP's arch, my MC, the human who is "irrevocably linked to another," who I will say is one of the demons, has to try and stop a country wide worth of demons who are being controlled to slaughter each other and humans. Helping her is the witch and the other demon, her "linked" demon got lost in the fighting fray, so there is the added complication of him getting himself killed, which would kill the MC. They've figured out a way to stop the fighting in the area they are in (NYC), which would draw out the ones orchestrating the fighting, so that way they could try to stop them. Their method is a unique power MC gained from her linked demon, and they use a special Tower to channel her power and target the fighting demons. The idea is to use her power to drain them of energy which would in essence not kill them but make them pass out, but in return MC has to take all of that energy into herself and when she does it almost rips her apart. The plan seems to work though, they draw out the bad guys, but an important oversight causes MC's allies to be blasted through a window to their supposed deaths (they are at the top of the Tower), and MC to be taken by the bad guys to be used as a tool in their destructive plan. It doesn't look too good for MC after that, but in the ninth hour she comes out on top.

When I thought about what I put her through in this part of the story I realized what a harsh, harsh life she would have if she was a real person, and she would most likely never survive what I put her through! It's fun to write those hard scenes where your MC suffers though, because when they come out on top it's all the more better.